Spyder – the good and the ugly

There has been some noise recently on Planet Gnome about ColorVision Spyder2 support in Linux ArgyllCMS. Ross Burton reported success in profiling his display with this screen calibration device.

So I had to try for myself 🙂

If all compilation goes well, go into the spectro directory. You should find there a spyd2en utility that takes a file from the Spyder driver to use it in Linux (yes, that injects proprietary code in ArgyllCMS). The file is CVSpyder.dll, which you can also pass as a argument to spyd2en, in case.

Afterwards, you can just plug your Spyder and use dispcal to start your monitor calibration. Now the main task is to figure out the command line options available and what they do 🙂

As a first test, I simply put:

I had to run dispcal as root otherwise it wouldn’t allow me to access the usb colorimeter – I guess changing the permissions of /dev/bus/usb/… would have been a more elegant solution…
-v is for verbose
-y l tells dispcal to calibrate an LCD monitor (-y c for CRT)
./test.cal is the output profile.

Since this was just a test run (and this was not my photo monitor anyway), I hit 6.

The calibration took forever and a day to complete (measuring a gazillion of patches, averaging plenty of deltaE, checking candelas/m2 and iterating again and again – well 64 patches time 3 iterations). Much longer than in Windows.

This process spit out a test.cal file which was loaded via:

As far as I can see (this was just a quick first test run) the result is as good as can be – I tried loading a profile made under Windows and the Linux one; my display was very similar. OK this is not a scientific test (!!) but it tells me nothing is way off.

By the way, my colorimeter is a (primitive) Spyder 1, so both the Spyder 1 and 2 are supported.

That is for the good – Graeme Gill, you utterly rock!!

The ugly is that ColorVision is just releasing a Spyder 3 to the market and has been quite aggressively dismissing any idea of support towards OSS – as you can read in this long thread on the OpenICC mailing list. Which made Hal V. Engel say with wisdom:

So if you have a Spyder 1 or 2, support for Linux is (almost) here. If you are shopping for a (relatively cheap) colorimeter, check Huey 🙂

And with that, the last photography thing that I needed to do under MS-Windows is gone… 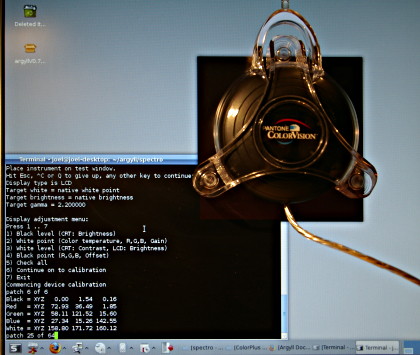 This entry was posted on Friday, November 16th, 2007 at 12:29 am and is filed under Color Management. You can follow any responses to this entry through the RSS 2.0 feed. You can skip to the end and leave a response. Pinging is currently not allowed.

52 Responses to Spyder – the good and the ugly